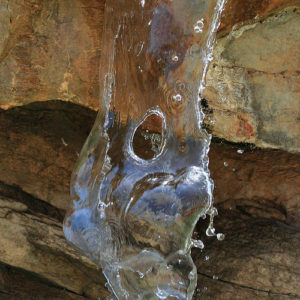 “Moses and Aaron gathered the assembly in front of the rock. He said, “Listen now, you rebels! Must we bring you water from this rock? Then Moses raised his arm and struck the rock twice with the staff. Water gushed out and the community and its livestock drank”
(Numbers 20:10-11).

Of this incident Psalm 106:32-33 says, “And they provoked wrath at the waters of Meribah and Moses suffered on account of them; because they embittered his spirit, and he spoke rashly with his lips.” Moses has endured many periods of complaints from the children of Israel, but on this occasion his spirit is embittered. There could be many causes for this; the stress of leading a nation for example, or that fact that he is mourning the death of his sister Miriam (Num. 20:1).

Whatever the cause, Moses in his anger says to the children of Israel, “Hear now, you rebels, shall we bring water for you out of this rock?” He then strikes the rock twice, it gives its water and the congregation is satisfied. Still the Lord responds, “Because you did not believe in Me, to set Me apart in the eyes of the children of Israel, therefore you do not bring this assembly into the land which I have given them.”

Moses did not believe the Lord? We find numerous testimonies in the Torah and the New Testament that speak to the faith of Moses, and to his longing to experience the presence of the covenant Lord more deeply. Moses has endured the frustrations of leadership with grace, patience, humility and generosity of spirit; yet, in this moment of frustration and bitterness, Moses does not heed the word from God and loses his composure and spiritual vision. As a result, he will not lead the children of Israel into the Promised Land.

The medieval Jewish commentator Rashi explained that had Moses done as the Lord commanded that the children of Israel would have learned a valuable lesson: “If a rock, which neither speaks nor hears nor is in need of sustenance, obeys the Word of God, how much more so should we.” Moses did not use this moment to glorify the Lord and lead the people to a deeper understanding of Him; but rather, scolded them and revealed a deep bitterness that had developed and festered inside of him.

The incident at the rock was about far more than thirst and a need for water. It was to be a testimony of Yeshua/Jesus in the midst of his people. The apostle Paul writes of the Rock, “And all drank the same spiritual drink – for they were drinking from a spiritual rock that followed them, and the Rock was Messiah” (1 Cor. 10:4). The Lord desired to demonstrate the power of his Word by showing that a rock, which neither hears nor feels, can do what is unnatural to it and bring forth living water when the Word of the Living God is spoken to it – enough to supply a nation. This water, from the unlikeliest of sources, can transform bitterness, anger and fear into trusting faithfulness in the covenant Lord.

In this desperate moment, Moses inserted himself into the deliverance of the Lord’s people. He struck the Rock. The Lord desired to show his people that they would be delivered by the power of his Word, and by that power alone. The Word became flesh in the person of Messiah Yeshua/Jesus. It is by his action and his life alone that man is saved. We learn from Moses, that when man attempts to save himself – disregarding his Word – tragedy will always result.

Speak the Word of Life, and the wells of salvation will burst forth to the glory of the Lord alone.